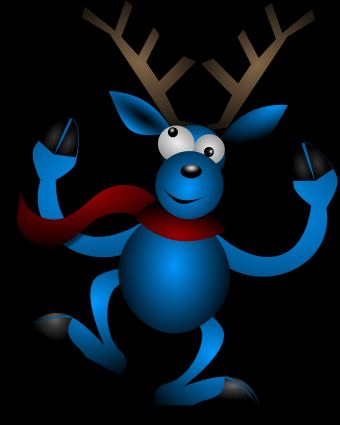 A Homebrewer's version of Twas the Night Before Christmas

Twas the night before Christmas, and all through the house, every creature was thirsty, including the mouse.

The steins were empty, and the bottles were too. The beer had been drunk with not time to brew.

My family was nestled all snug in their beds, while visions of Christmas Ale foamed in their heads.

Mama in her kerchief lamented the drought, she craved a pilsner and I, a stout.

When out on the lawn, there arose such a clatter, I sprang from my chair to see what the matter.

Away to the kitchen I flew like a flash, opening the door with a loud bang! crash!

I threw on the switch and the lights, all aglow, gave a luster of mid-day to the brew-pot below.

When, what to my wondering eyes should appear, but Gambrinus himself, the patron of beer.

With a look in his eye, so lively and quick, he said, "You want beer? Well, take your pick."

More rapid than eagles, his recipes they came, as he whistled and shouted and called them by name.

To the top of the bottles, the short and the tall, Now brew away, brew away and fill them all!

As dried hops before a wild hurricane fly, and then without warning, settle down with a sigh.

So towards the brew-pot, the ingredients all flew, malt extract, roasted barley and crystal malt too.

And then in a twinkling, I heard it plain, the crackling open of each barley grain.

As I drew in my head and was turning around, into the kitchen, Gambrinus came with a bound.

He was dressed like a knight, from his head to his toes, with an old family crest adorning his clothes.

A bundle of hope, he had flung on his back, and the brewing began when he opened his pack.

His hops were so fragrant! His barley, how sweet! This adjuncts included munich malt and wheat.

The malted barley was mashed in the tun, then boiled with hops in the brew-pot until done.

Excitement had me gnashing my teeth, as the sweet smell encircled my head like a wreath.

Beer yeast was pitched, both lager and ale, the wort quickly fermented, not once did it fail.

It was then krausened, or with sugar primed, and just being bottled when midnight chimed.

A wink of his eye and a twist of his head, soon gave me to know, I'd be shortly in bed.

He spoke not a word but kept on with his work, and capped all the bottles, then turned with a jerk.

And laying a finger alongside his nose, he belched (quite a burp!) before he rose.

Clean-up was easy, with only a whistle, and away the mess flew, like the down on a thistle.

But I heard him exclaim, 'ere he left me the beer, A Merry Christmas to all! And a HOPPY NEW YEAR!"

Editor's Note: we are not sure where this originated to give credit to the writer...

Niagara Brewery Collectibles Club Meetings are held the third (3rd) Monday of each month. Locations change month to month. Visit our events calendar for details. New members are welcome to join our meetings on the third Monday of every month at 7pm.

The Niagara Brewery Collectibles Club Will Be At The OCB Conference!

OCBC is Canada’s largest craft brewing industry annual conference and trade show. With the growth of the craft brewing sector in the past two decades, there are now hundreds of operating breweries, contract brewers and brewpubs in communities across the province. The global pandemic has had a major impact on craft brewing retail and tourism. Breweries are working in collaboration with their local communities, business organization, government and industry colleagues to build and sustain reco...

The Niagara Brewery Collectibles Club Is On TV!

Larry Lemelin from the Niagara Brewery Collectibles Club joins Mike Balsom in studio to show off some unique brewery collectibles and to promote the 8th Annual Fall Trade Show. It will take place on Saturday, September 24th at Casa Dante in Welland.

We're On The Local Radio!